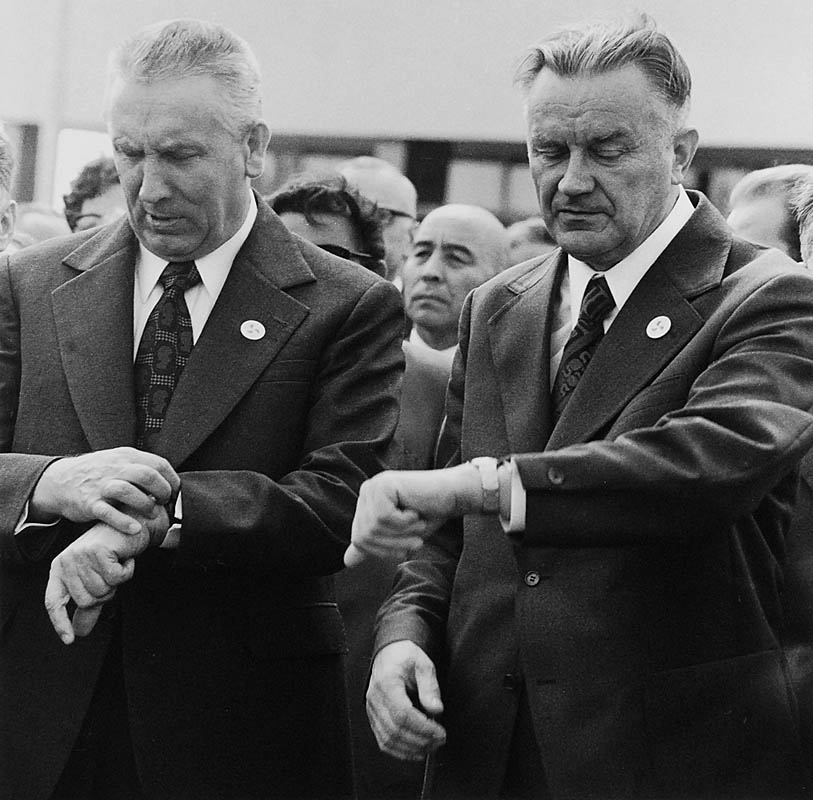 The best known and most widely published photograph by Bogdan Łopieński. The picture is one of the most iconic images of Communist times in Poland. When it won the first prize in the Press Photography Competition in 1974, censors banned it from publication opposing the "undignified" way in which the leaders were shown. Ultimately, Edward Gierek himself lifted the ban. The picture appeared in the press around 200 times and the fees for the publication were enough to buy a Fiat 126 p - the Pole`s dream car at the time. The picture, reproduced in many copies and in large formats, was carried during May Day marches in 1974. There was a fashion among party secretaries to pose in exactly the same way. After some time, the Poles spontaneously renamed the photo as It`s Time to Go. Then, the censors again banned the photo from publication. When the solidarity movement started to grow in force, opposition activists printed a poster showing the photo torn in half. The television service made a film about that action, which was to premier on 13 December 1981 - the day when Martial Law was introduced. Naturally, the film was not aired.
Awards: First Prize at the Press Photography Competition (1974), Warsaw; 1st Prize, Interpress Photo, Berlin (1975).
The photograph has been shown at a number of exhibitions, including Past Perfect, Stara Galeria ZPAF (2006) and Free time, Zachęta National Gallery of Art, Warsaw (2013).
Other prints of the work are part of the collections of the National Museums in Warsaw and Wrocław and of the National Library in Warsaw.